Of the state, policies and economics

These are thoughts on various issues of our daily lives which we sometimes ponder upon. The views expressed are personal.

Is Education only for the rich?

Education is certainly indispensable for a nation’s growth. In a country of 1.25 billion where only around 14% of the population is matriculated, revolutionizing the education system should be of prime importance. India’s poor rating in Human Resource Index is primarily because of poor education.

While every child in India has a right to free and compulsory education till 14 years, it is sad to know that more than half of the total population falling under RTE can’t read or write. It has been seen that a fifth grade student is not able to solve a 2nd grade Mathematics problem. The percentage of 5th grade students who can read 2nd grade text has remained below 50 and this has decreased over time. Is this the quality of education we guarantee to have? Does this education help? There is a clearly visible class and caste divide coupled with rural-urban divide in education. The standard of education varies from school to school. While the private schools have English based globally recognized curriculum, the government schools offers the old traditional curriculum with little exposure to new opportunities. The schools in villages and tribal locations are the most neglected ones. These government run schools lack proper classrooms, libraries, laboratories and good teachers to facilitate learning. Only about 65% of government schools have usable toilets out of which only 55% are female sensitive. 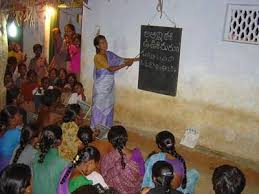 The adopted curriculum at most of the schools focus on rote learning rather than understanding the subject and its application in real world scenarios. Availability of quality teachers and student to teacher ratio is another problem of these schools. According to MHRD, the student to teacher ratio in primary and upper primary schools is above 30:1 and approximately 9 lakhs teaching positions are vacant in primary schools across the country. Average qualification of teachers in private schools is better than those of government schools and hence the results. The increased demand of private schools proves the dissatisfaction of children and parents from government schools. Teachers in private schools are motivated through incentives and competition to perform better while government schools do not have such incentives and motivations. These factors have led to high dropout rates especially among the students from underprivileged section which went as high as 35% percent at primary level. These dropouts increased to an alarmingly high level of around 65% as we move to secondary education level.

Governments have seen education as a crucial development tool and centered their policy development on it. National policy on Education, Right to Education and National Curriculum Framework (NCF) are great examples of policies that have been implemented. National policy on education was formulated first in 1968 which aimed at equalizing educational opportunities and education for all. Incentives like mid-day meals, uniforms, textbooks and free bus passed were given to students to encourage more enrollment. The changes helped increase the enrollment at primary level from 19.2 million in 1950 to 130.8 million in 2004-05. These achievements motivated the government to take next steps. National Curriculum Framework was designed to guide the schools for implementing new syllabi, better teacher education, innovative learning methodologies and flexible examination system. The framework was aimed at solving the problems holistically. It aimed at making learning natural for students in schools by connecting knowledge to outside world and modifying curriculum so that learning goes beyond the classroom. This framework proposed making examinations more flexible so as to assess students throughout their study period and not just based on exams. It based assessment on a continuous learning evaluation and not just examinations.

However, these targets still remain unachieved because of the flaws in implementation and execution of the education policies. Our policies have been evolving since independence and we have only improved based on feedback and research at all stages. The suggestions provided by NCF can be implemented in schools by participation from students, parents and school administration collectively. Issues related to the quality of government or municipal schools can be tackled by proper budget allocation and public private partnerships in education. Partnering with private schools to use the common infrastructure and thus provide better facilities to all students is one of the options. A common pool of teachers for subjects like performing arts & sports and public libraries keep the cost of execution in limit and provide more people with an opportunity to learn. I think people as well as government should understand that an investment in education is an investment in future.

“Education is the most powerful weapon which you can use to change the world.” – Nelson Mandela.

Education builds a nation by building its people. I don’t need to emphasize more on the importance of education. In the end, I would like to convey that our education system has evolved a lot since independence. We have a government school in reach of most rural areas. Hopefully, we will evolve towards a better system in future. Be a part of the change and join hands with governmen                      y.

Graduated in 2013 from IIT Hyderabad and worked as an Analyst at Goldman Sachs. Software engineer passionate about changing India through public policy. Specifically interested into the field of Education and Health.

This site uses Akismet to reduce spam. Learn how your comment data is processed.